And admit that the waters

Around you have grown

And accept it that soon

You’ll be drenched to the bone

If your time to you is worth savin’

For the times they are a-changin’

A Tipping Point In the Making...

Maybe it’s the fact that I grew up in the ‘60’s or the fact that the immortal words of Bob Dylan are just so profound, they are unforgettable. But whatever the reason, his song popped in my head when I heard the news about the World Anti-Doping Agency removing CBD from its banned substances list.

And it’s not just the fact that more and more folk are seeing the benefits of CBD and making it easier to access. For athletes, CBD can be a real boon as it relates to natural treatment for aches, pains and inflammation. And now, they can use it with fear of impacting their athletic career.

So it’s especially heartening when a major international agency such as WADA jumps on the bandwagon. WADA, which governs drug testing in such major theatres as the Olympics, also sets the standard for anti-doping guidelines in many other US and international sports leagues.

According to its website “The World Anti-Doping Agency (WADA) was established in 1999 as an international independent agency composed and funded equally by the sport movement and governments of the world. Its key activities include scientific research, education, development of anti-doping capacities, and monitoring of the World Anti-Doping Code”

Currently, under the United States Anti-Doping Agency and UFC rules, cannabis and its metabolites are prohibited. Starting next year, however, CBD will be allowed, while synthetic cannabis and cannabis products rich in psychoactive THC will remain banned.

“Annually, the Prohibited List review involves a very extensive stakeholder consultation process over the course of nine months,” said Director General Olivier Niggli in his official statement. “In reviewing the List, experts examine such sources as: scientific and medical research; trends; and, intelligence gathered from law enforcement and pharmaceutical companies in order to stay ahead of those that endeavor to cheat the system.”

Here is the passage of the new WADA 2018 Prohibited List that references cannabinoids: 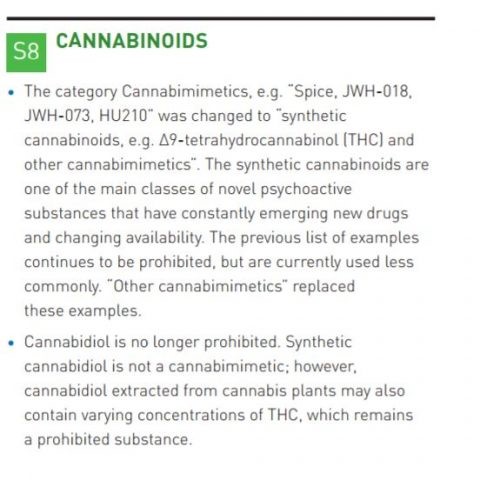 At the end of the day, we think this is BIG NEWS. And we think you’ll agree.